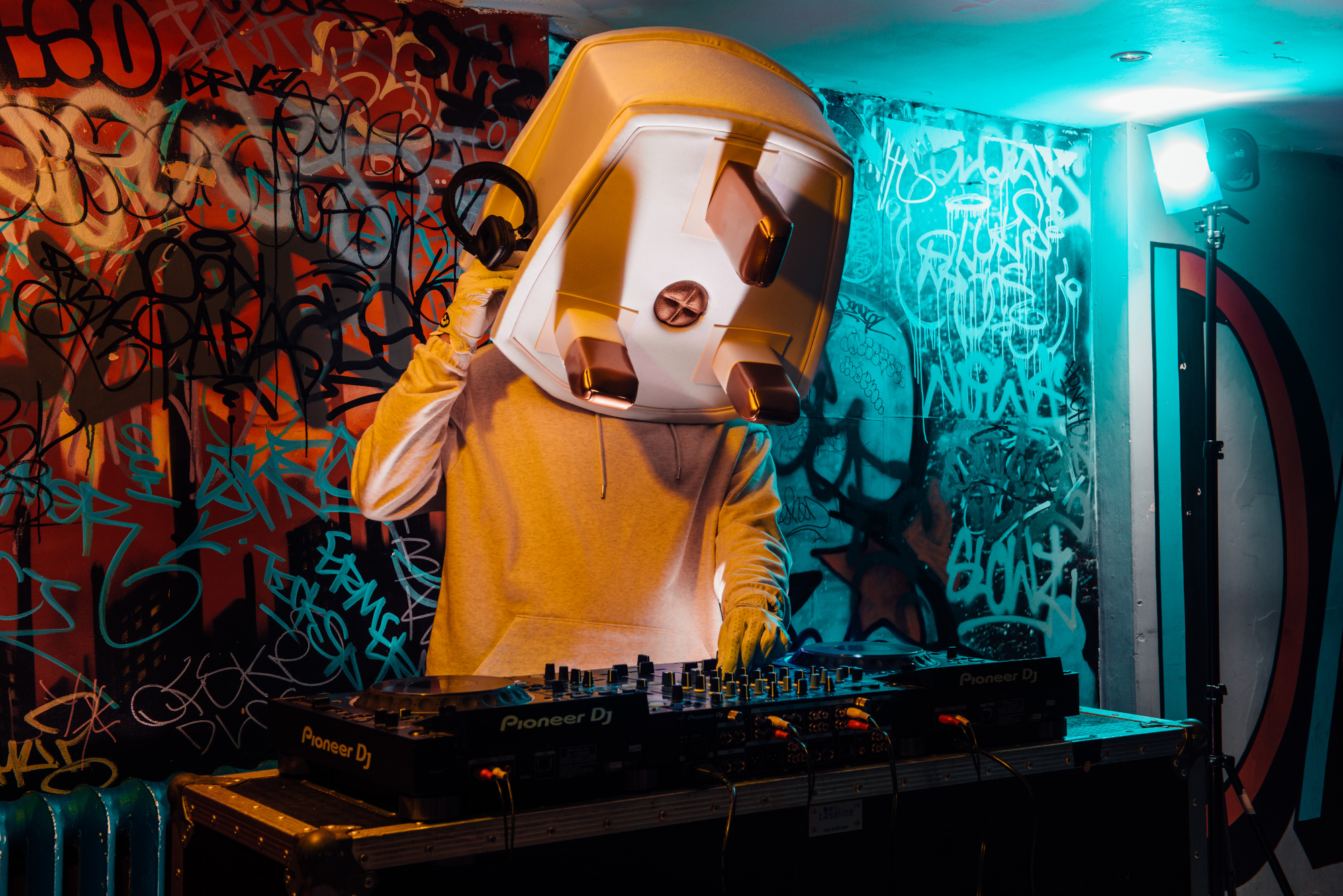 Thanks to the mega-success of Deadmau5, Daft Punk and Marshmello, we’re all familiar with the masked DJ trope. But there are far more of them out there in the wild than you may have assumed. To celebrate the release of the DJ-ing game Fuser, DJ Plugsy – the UK’s very own masked EDM bro – talks us through the field.

Who: Mark Archer and Chris Peat (later replaced by Josh Doherty)
Wears: Industrial-style face masks and biohazard suits
What: British techno duo from Stafford whose hardcore tunes put them front and centre of the early ‘90s rave movement.
Plugsy says: “The daddies. And weirdly relevant again now we’re all walking round looking like we work in a chemical plant.” 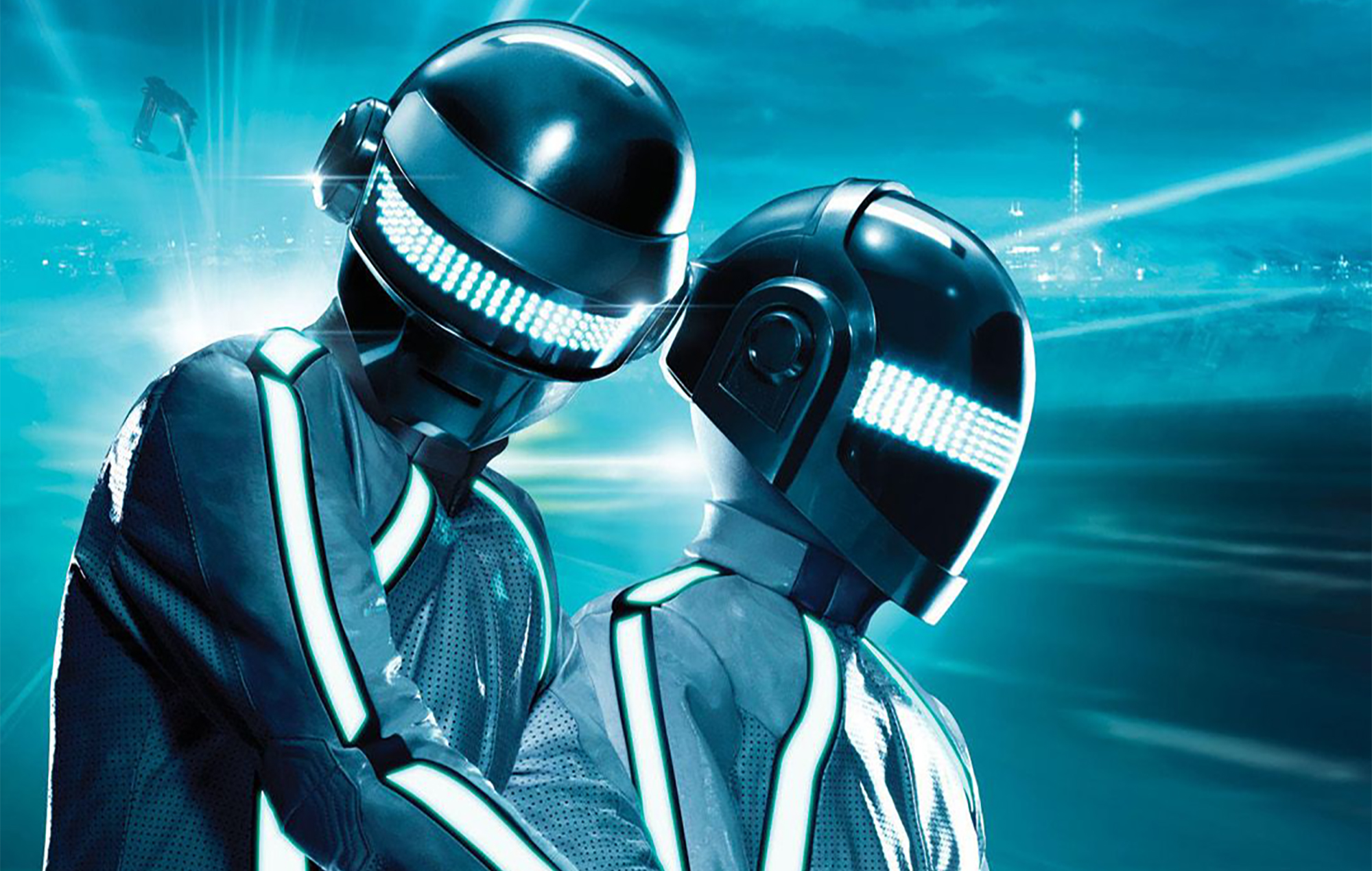 Who: Thomas Bangalter and Guy-Manuel de Homem-Christo
Wears: Shiny robotic helmets
What: The French future-disco duo hid their faces with cheap masks from the very start but, following the success of 1997 debut album ‘Homework’, they returned as budget-busting bionic brothers-in-arms for 2001 follow-up ‘Discovery’ and have never looked back.
Plugsy says: “Icons. Legends. GODS. If Altern-8 were the pioneers, these guys added the finesse. And money.” 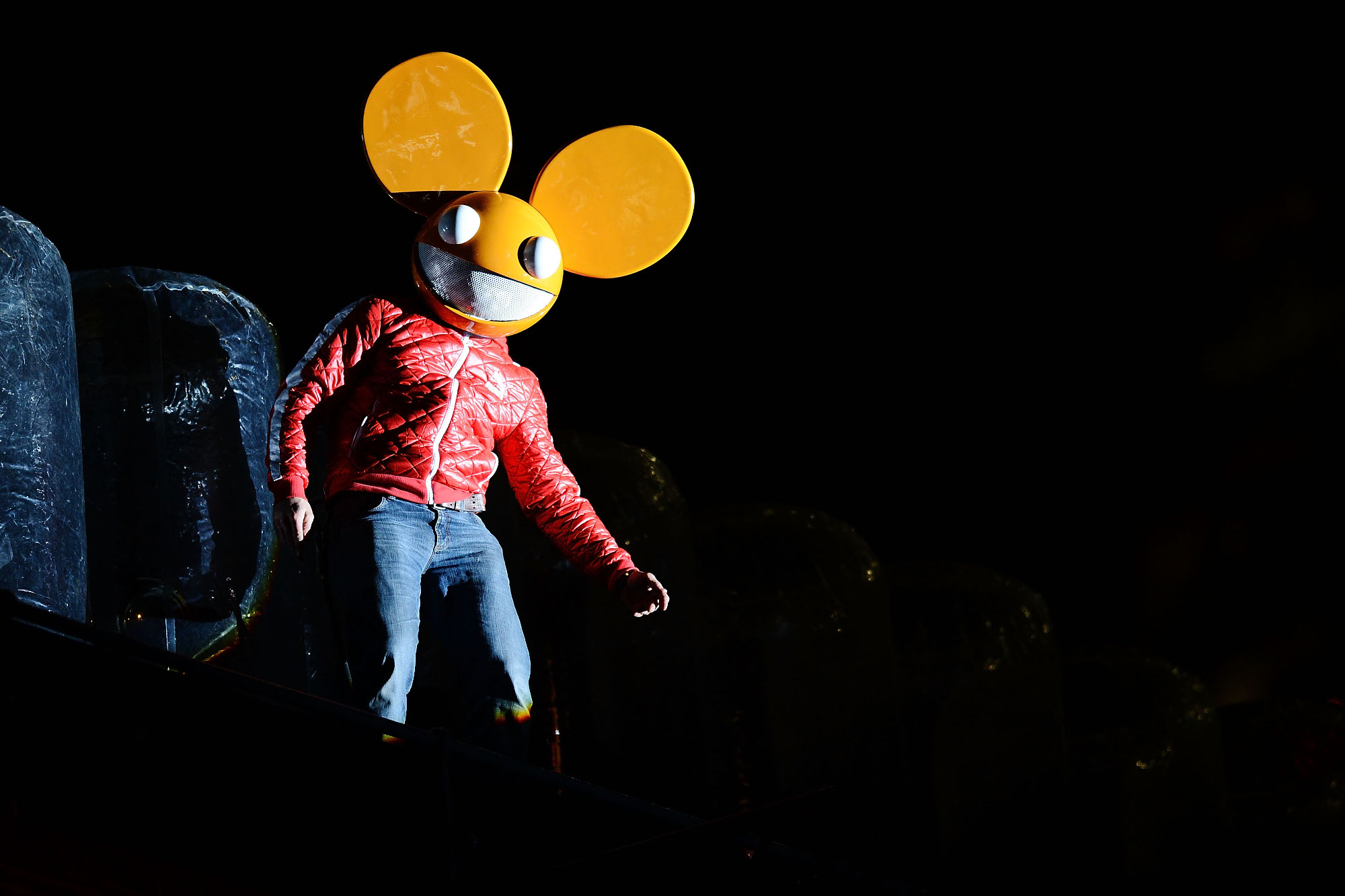 Who: Joel Thomas Zimmerman
Wears: Stylised mouse helmet in multiple versions
What: With an image that pinches the iconography of Disney’s Mickey Mouse and the clean graphic style of designer vinyl, Deadmau5 is one of the most successful masked DJs ever.
Plugsy says: “Begrudging respect for the cheese nibbler. I actually used to do a Deadmau5 tribute act for weddings and stuff: Livemau5.” 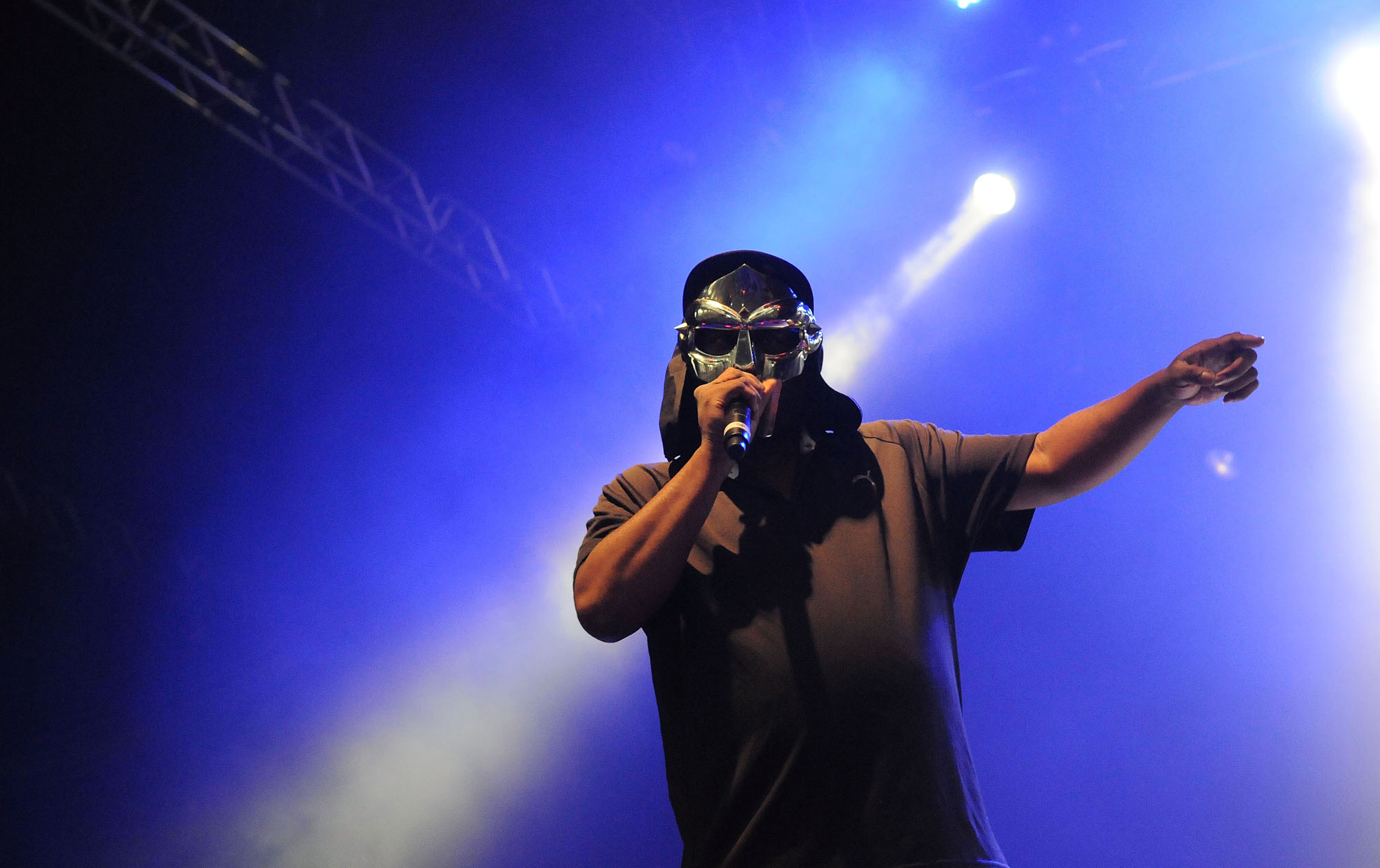 Who: Daniel Dumile
Wears: Metal mask inspired by Marvel’s Doctor Doom
What: Unceasingly cool British rapper, songwriter, and record producer.
Plugsy says: “This guy can do it all: fight Spider-Man, rule Latveria with a literal iron fist, produce, rap. Not sure he’s a DJ though. Were you running out?” 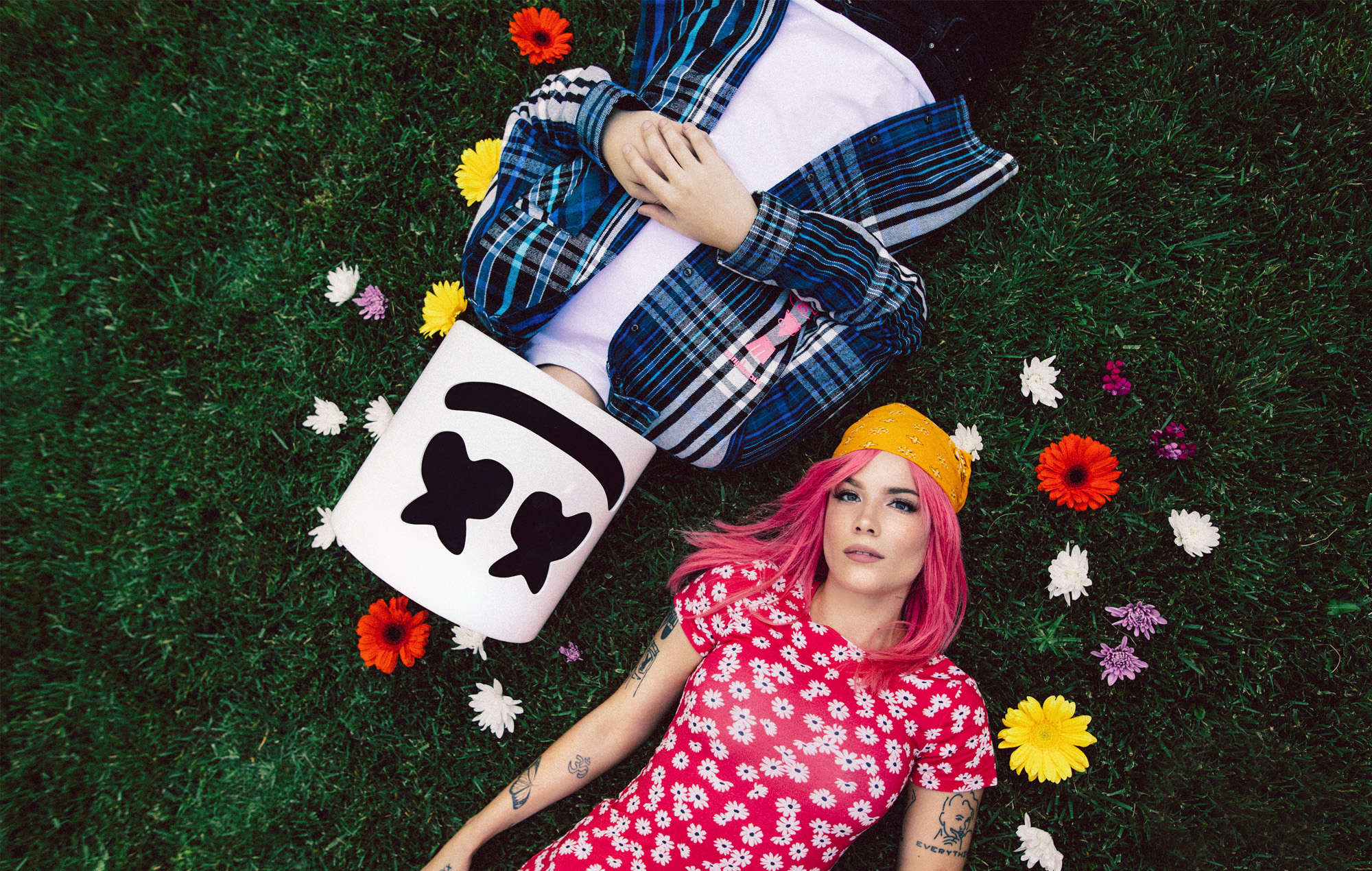 Who: Christopher Comstock
Wears: A white, marshmallow-shaped helmet with cartoony eyes
What: It’s always fluffy in Pennsylvania, where Comstock cooked up a masked DJ mega-brand. You can even win plush Marshmello heads in seaside teddy picker machines these days.
Plugsy says: “I call him Marshmuppet. Because I think he’s a muppet.” 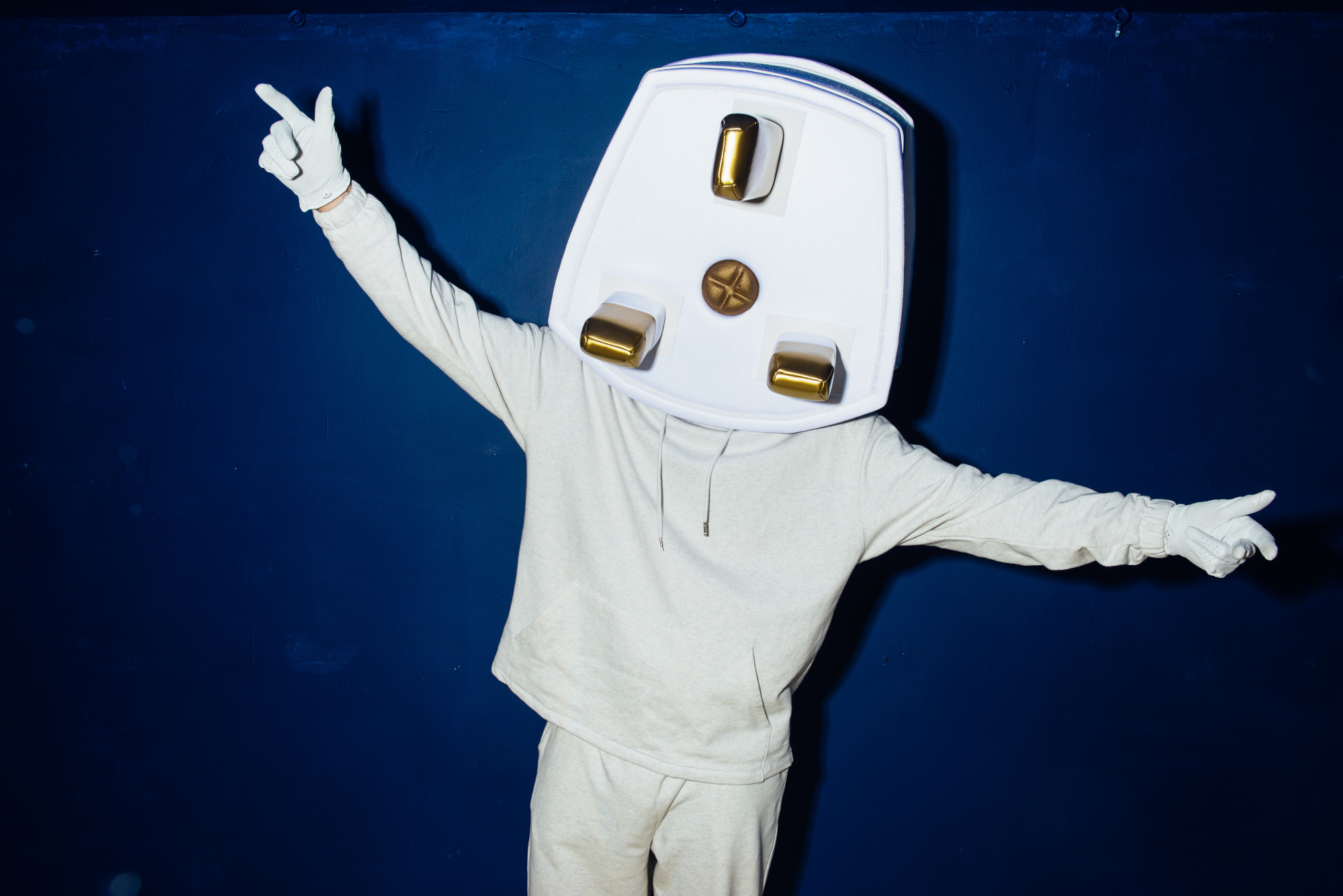 Who: Secret identity
Wears: 3-pin plug helmet
What: The UK answer to the EDM-masker movement, Plugsy’s music sounds like Skrillex remixing a 1990s modem loading up Pammy’s sextape.
Plugsy says: “Got it pretty bang on with that description.” 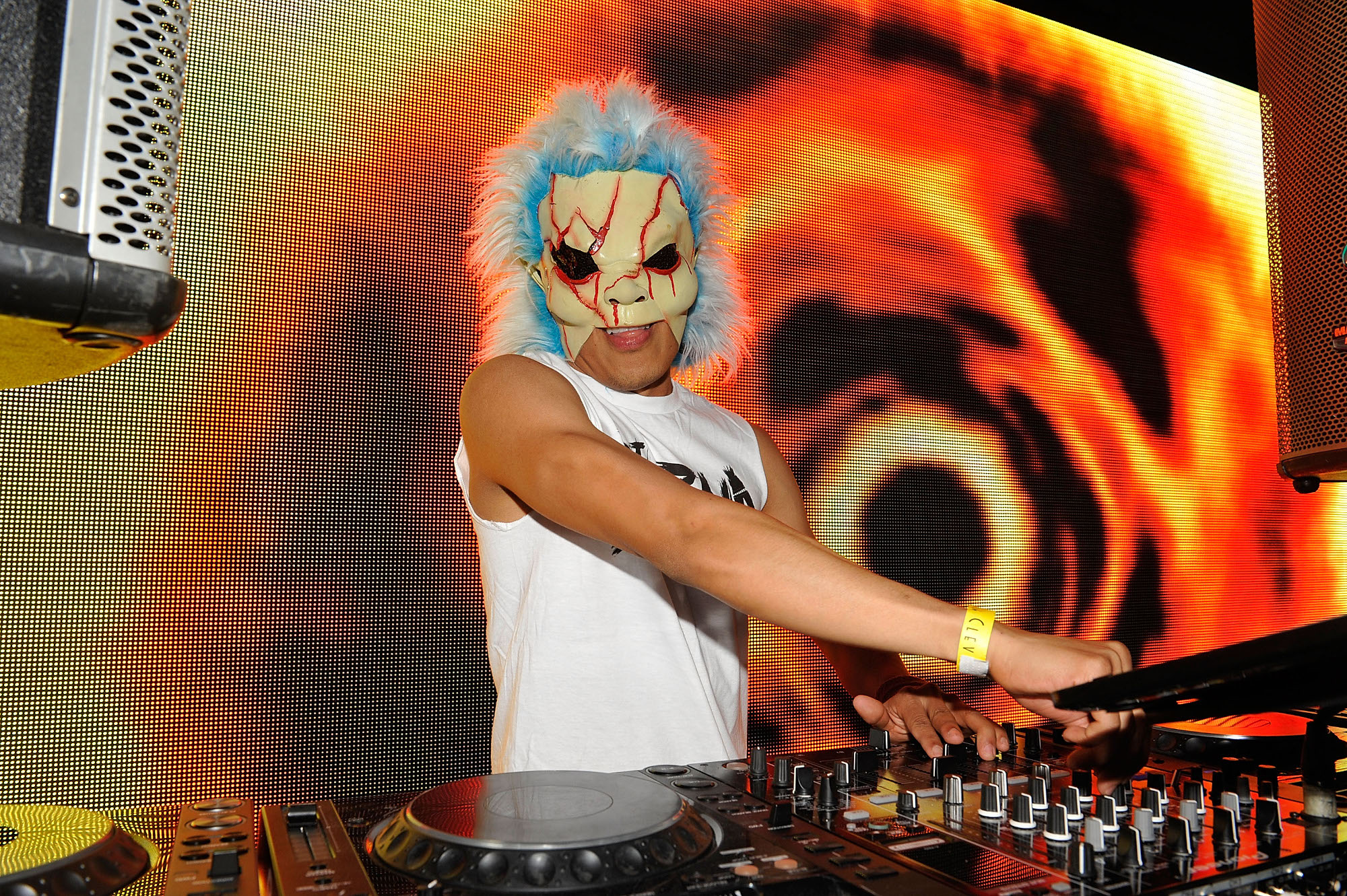 Who: Secret identity
Wears: A hairy fright mask
What: The horror-influenced DJ, who looks like the third wheel on a night out with Eddie The Ed and Chucky, describes himself as the “World’s Craziest Most High Energy DJ”.
Plugsy says: “I bump into this guy at the odd festival. I try and give him a wide berth.” 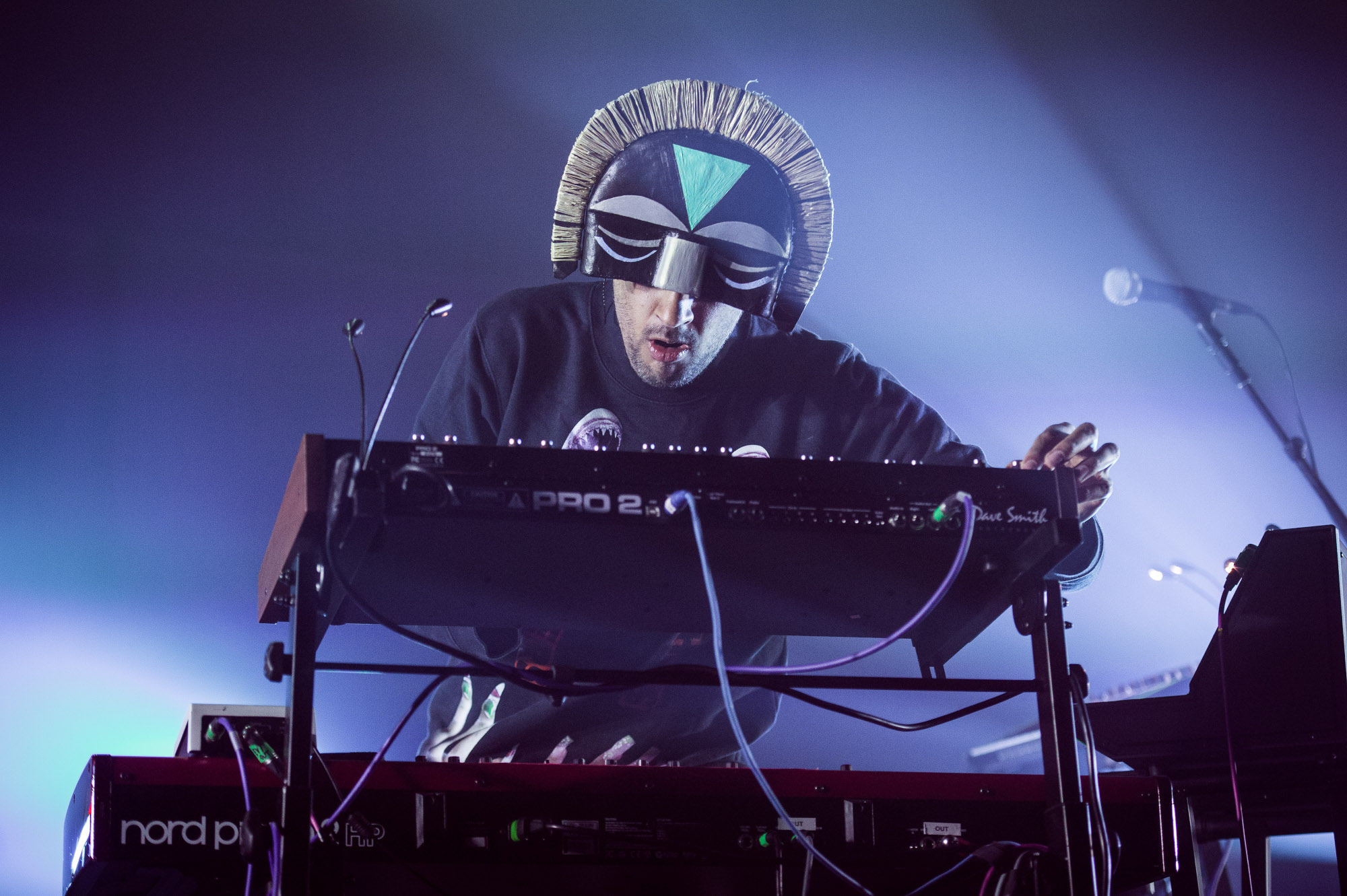 Who: Aaron Jerome
Wears: Interpretations of native ceremonial masks, designed by anonymous artist A Hidden Place
What: British electronic artist who’s worked with Radiohead, MIA and Mark Ronson.
Plugsy says: “I thought about calling myself PLGZY for a bit, but this fella put me off by getting there first. Clever music for boffins, this. Not a fan.”

Who: Franck Rivoire
Wears: Final Fantasy-inspired blackout balaclava, with glowing white eyes.
What: French DJ whose EPs are all named for the date they were completed, and whose debut album title is a kanji character.
Plugsy says: “Pretentious? Moi?” 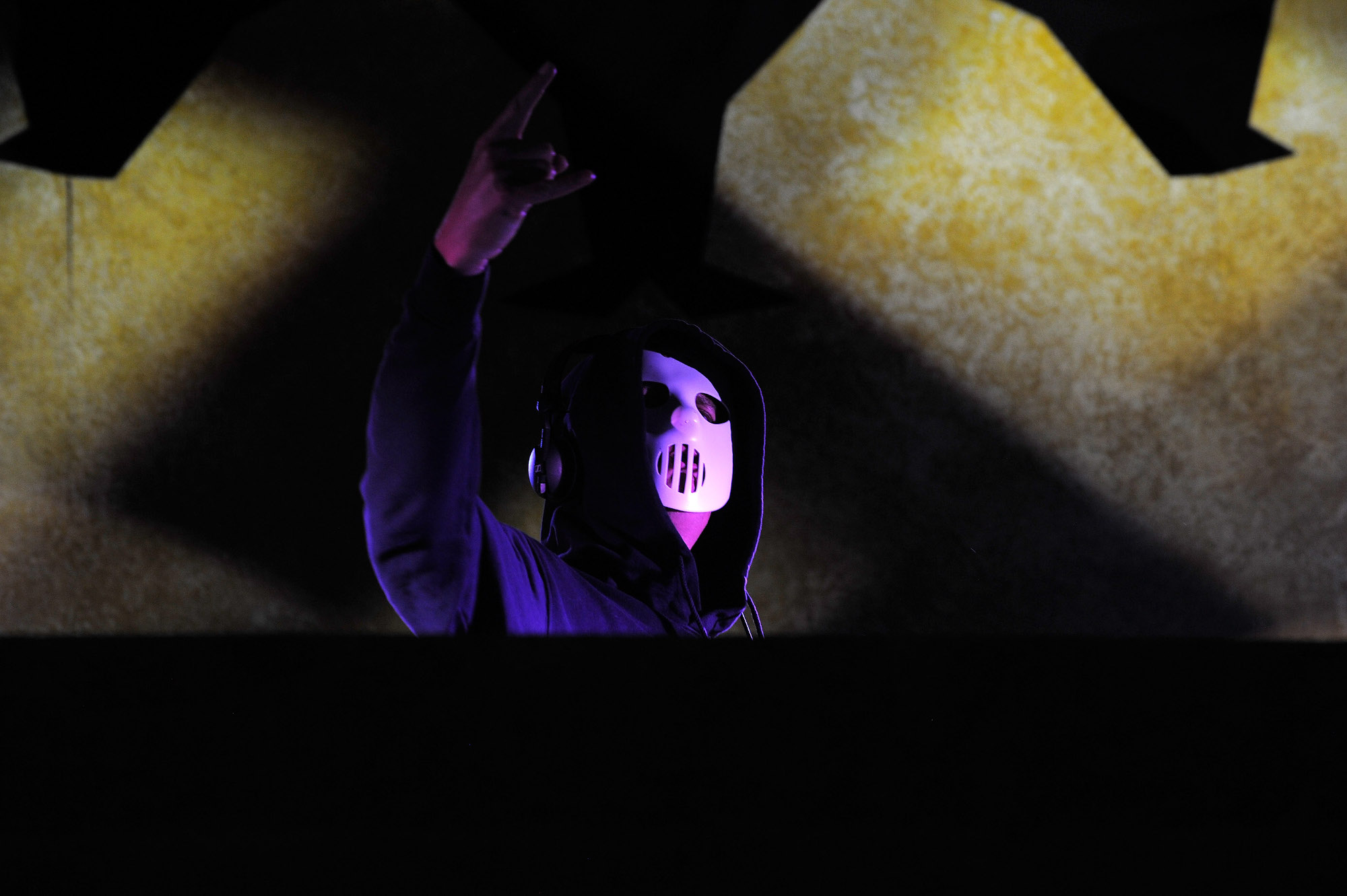 Who: Danny Masseling
Wears: Jason ‘Friday The 13th‘ Voorhees-style hockey mask
What: The Dutch DJ broke out in 2006 with an album titled ‘Pissin’ Razorbladez’ and hasn’t let up since. On stage, he can be found performing with vocalist MC Prozac.
Plugsy says: “The Jason mask is a bit weak, but you can’t knock a guy who had a song called ‘Bonified Alkoholik Musik Making Muthafucka (B.A.M.M.M)’.”

Who: Alexander Björklund and Sebastian Furrer
Wears: Audio cassette helmets
What: Swedish duo whose sole album, released in 2014, was amusingly titled ‘Eject’.
Plugsy says: “I think these lads have the same costume designer as Yours Plugsy. Never heard of ‘em.”

Who: Stefaan Vandenberghe
Wears: Green latex facemask and bug-eye shades
What: Creepy AF Belgian artist whose nickname is The Man With The Green Mask.
Plugsy says: “I think my washing machine is a Lektroluv. Good piece of kit – keeps my whites whiter than white.”

Who: Secret identities
Wears: Magenta-coloured latex masks and LED shades
What: More Dutch DJs, the Funks first masked up for a party in 2008. “We bought some cheap, pink masks and advertised with the fact that we managed to book 2 world-famous DJs. That night sold out completely,” they have said.
Plugsy says: “I respect people who can keep a secret identity cos I speak from experience when I say HMRC try really, really hard to find you.” 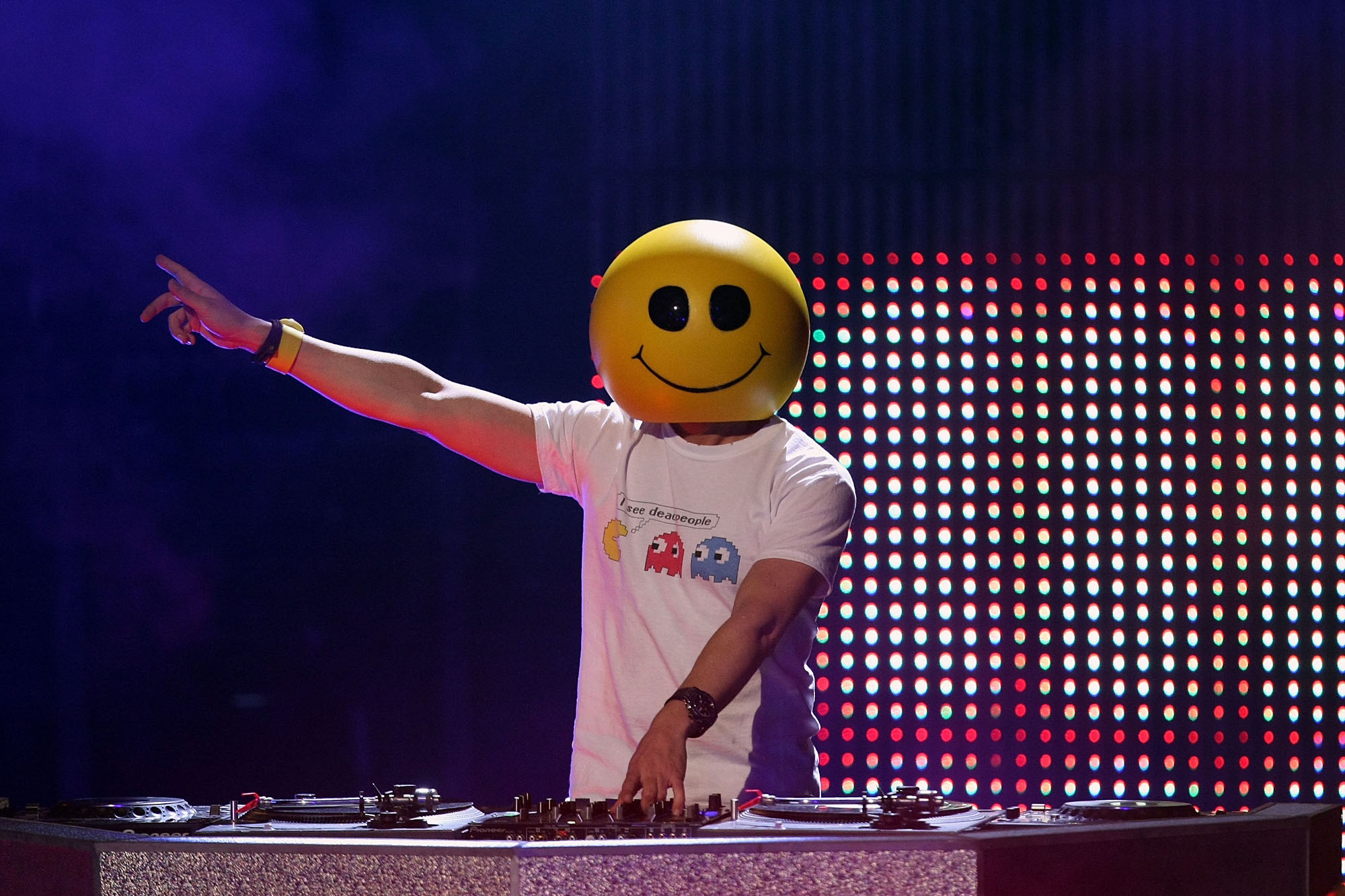 Who: Michael David Kull
Wears: a spherical yellow smiley helmet
What: Swiss music producer and dance DJ whose song ‘2012 (If The World Would End)’ was a hit in German speaking countries, even if he got the date of the apocalypse out by, ooh, about eight years.
Plugsy says: “This guy got in there and nabbed the smiley symbol, which is the masked DJ equivalent of the British pinching the Elgin Marbles from Greece, cos the smiley belongs to all of us. Disrespectful, bro.”

Who: Adaro and Ran-D
Wears: ventriloquist dummy masks
What: Dutch DJs whose frequent collaborations led to this unsettling union in the “raw hardstyle” genre.
Plugsy says: “I like raw hardstyle, but I tend to order medium-rare if it’s a place I’ve never been to before, cos that’s just sensible isn’t it.”

AS TOLD TO Arthur Pinger

DJ Plugsy is playing Fuser, the game that lets you live out your DJ fantasies, out now in shops and to download

The documentary series, DJ Plugsy: Locked Down, Plugged In, launches on NME on November 20, 2020 – don’t miss it